Thank God it’s friday, because starting up after two weeks off has been really hard! It doesn’t help that my boyfriend kept me up part of the night due to him coughing, so when the alarm rang less than 6 hours after I’d gone to bed, it’s safe to say I was pretty tired. On top of that I began sneezing right after applying mascara this morning – black stripes down my cheeks – try again. Hashtag girlproblems 😉

I’m not doing much this weekend apart from a visit from my mother-in-law on Sunday. I guess it’s one more weekend of binge-watching tv-shows and playing PlayStation – what a shame (dripping with irony).

An empty weekend doesn’t mean empty nails! When you let the rest of your appearance slide for a couple of days, you need some glamour on your nails! I don’t know about you, but if I’m not doing anything I pretty much live in yoga pants and greasy hair in a bun and pretend I’m one of those people who absolutely don’t care about other people’s opinions.

I wanted to use the polish I bought the other day, so I decided to just do a simple glitter gradient/ombre (people differentiate between the two, but I don’t really know the difference. Guess I’ll have to spend a part of my weekend on google.) 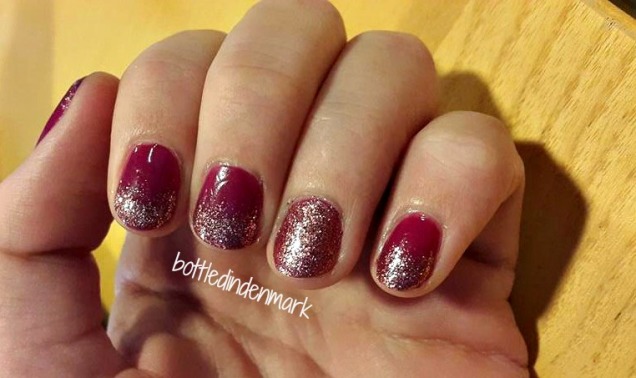 The glitter polish looks slighty pink when paired with the plum-color, but it’s very much copper-like when paired with other colors or on its own, but I guess that’s a good thing – that just makes it more versatile.

What are you doing this weekend?