A couple of weeks ago, my mother and I went to Malmö, Sweden for the weekend. Little had we realized that it was midsommer-weekend. Now in Denmark, we have something along the lines of a midsommer celebration, but it is usually a thursday evening with bonfires and food, so we assumed it was sort of along those lines in Sweden but without the actual bonfire/burning-of-witch-made-of-hay-thing we do here. We. Were. Wrong! In Sweden, midsommer is an actual holiday, so on Saturday, everything was closed. Well, with a drive to a shopping mall somewhere in Sweden, we managed to find something to do, and I did end up buying a few things. Mainly Wet n Wild-products, but a single China Glaze nail polish and a few marble candles snuck their way in to my shopping basket as well. The candles have been neatly packed in to one of the thousand moving boxes currently sitting in my living room – we move on Saturday – so I’ll have to show you those later on – they’re gorgeous!

In Denmark we don’t really have any Wet n Wild products, and we don’t have any China Glaze at all (boohoo!), so when I saw that both were a common thing in Sweden, I was so excited! Unfortunately, there was a very limited selection of China Glaze polishes, so I only ended up getting one.

I once saw a blogger or a YouTuber – I don’t really remember who – talk about this particular eyeshadow palette from Wet n Wild, and I’ve been wanting it ever since. I even have it ‘Saved for later’ in my Amazon basket, because as I said before, Wet n Wild isn’t available in Denmark. So naturally, when I saw that they had it, I snatched it as quickly as I could. It is the Wet n Wild Comfort Zone Palette. 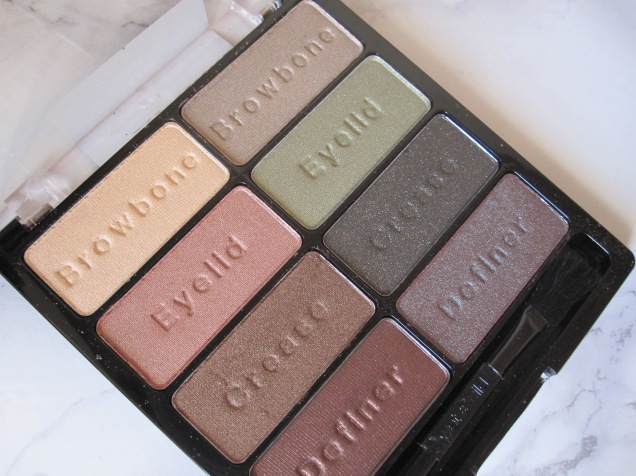 The definer shade on the right supposedly turns to a beautiful green color when applied wet, but I’ve yet to try that.

Now, I don’t know about you, but I have some wicked under-eye circles, and since I got new glasses they’ve really been showing a lot more. Before, the frames cut just across the circles and hid them, but these new ones have bigger glasses so I don’t have that luxury anymore. Apparantly, the new trend within the concealing area is color correction, so I had to give that a try. I really only use the pink shade for my dark circles, but it really works wonders! It matches my skintone so I don’t even have to put concealer or anything else over it (I don’t wear foundation at all). Big thumbs up to that trend and this palette!

And nail polishes.. I don’t really have any affiliations with Wet n Wild polishes. I’ve never tried them and never really heard anything about them. However, a good price is hard to resist, so when I found these polishes, I had to try a couple of them out. They’re called 1 Step Wonder Gel Nail Color and that intrigued me. Well, they’re actually 2 step because they recommend a base coat underneath.

I’ve had some really good experiences with these polishes – apart from the teal color, that one stains. Even without top coat they last me a couple of days more than polishes usually do on me, so that’s a win!

And that’s it! Thanks for reading!