I love wrapping presents. Usually, I wrap all presents myself rather than having them do it in the stores because I feel like they’re more personal that way. As you can imagine, picking the right paper is crucial. This year, we went for a silver holographic theme for the wrapping paper. As for ribbon, I have a trusted collection of different types and colors, but that doesn’t stop me from buying more every year, apparantly 😉 A present isn’t complete without two different colors of ribbon. As something new this year, I’ve been wrapping presents with silk ribbon, which I usually don’t like, but for some reason, I really love the look this year.

{Previously I haven’t liked silk ribbons, but for some reason, I love them this year} 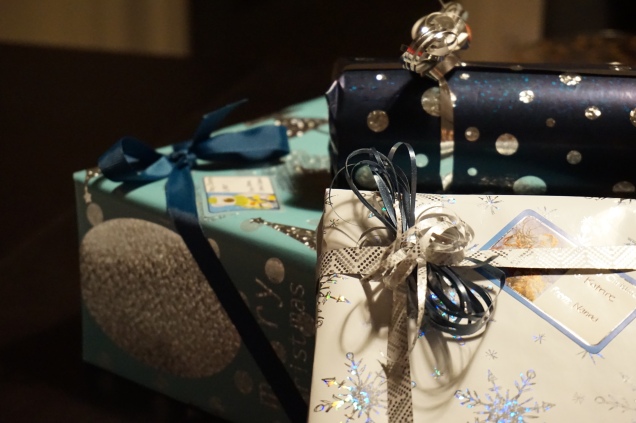 {Unless using silk ribbon, a present is not complete without two different kinds of ribbon} 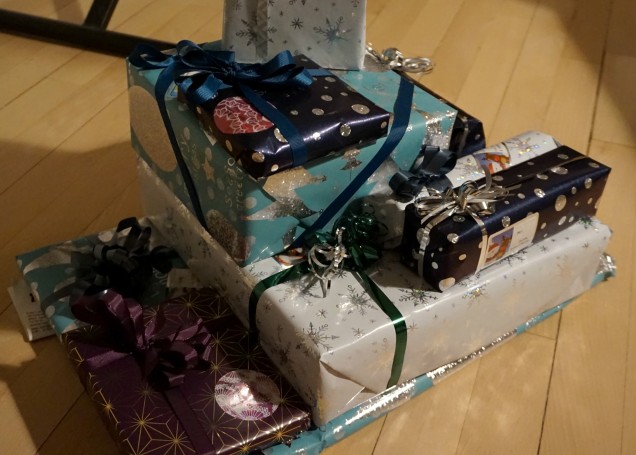 Do you like to wrap your present yourself or do you have others do it for you?

The holidays are upon us, and to make this time a little extra sweet, I am giving away 3 Sally Hansen nail polishes!

The polishes you can win are 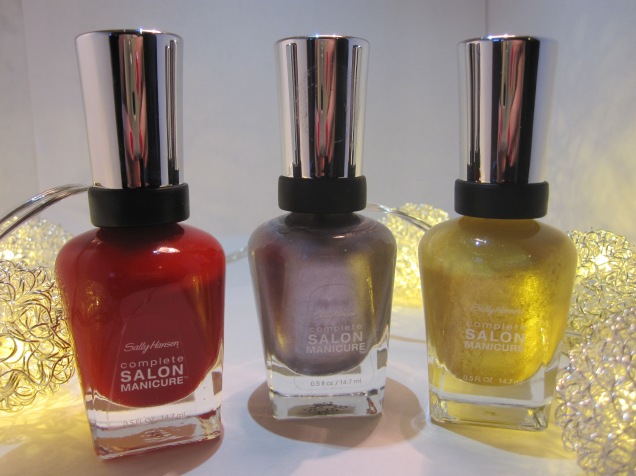 You can enter via the Rafflecopter – it is mandatory to follow the blog via WordPress, Bloglovin’ or email and then there are several optional possibilities that will earn you even more entries!

You can enter until midnight on 19th december (Danish time) and I will announce the winner on the blog on the 20th.

The giveaway is open worldwide!

The polishes were bought with my own money.

Sunday evening/monday morning at 4 am I returned home after a holiday in Tunisia.

We were invited on this holiday by my grandparents to celebrate their golden anniversary. As they had held a huge party at their 25th anniversary, they decided that they wanted to do something different for their 50th. They invited their two daughters and 3 grandchildren + the partners making us a total of 10 people!

It was a very lovely trip! The hotel was beautiful and the service was amazing. There were these entertainers/animators running around all day trying to find people to join their activities. It was an all-inclusive hotel, and the food was good – It consisted of a lot of chicken (which I’m not a big fan of) which was a small minus, but other than that it was quite tasty. The hotel was probably the best hotel I’ve ever stayed at.

Friday was the day of their anniversary and everywhere we went to eat, the servers had decorated the table with flowers and after dinner they had made us a special cake – my grandparents were very happy!

The grandparents had absolutely NO wishes at all! That is why we had to be creative. That task fell onto my mother, boyfriend and I. My mother had an old, black gift box from a couple of years ago. We painted the lid gold and then painted on some black flowers and the number 50. 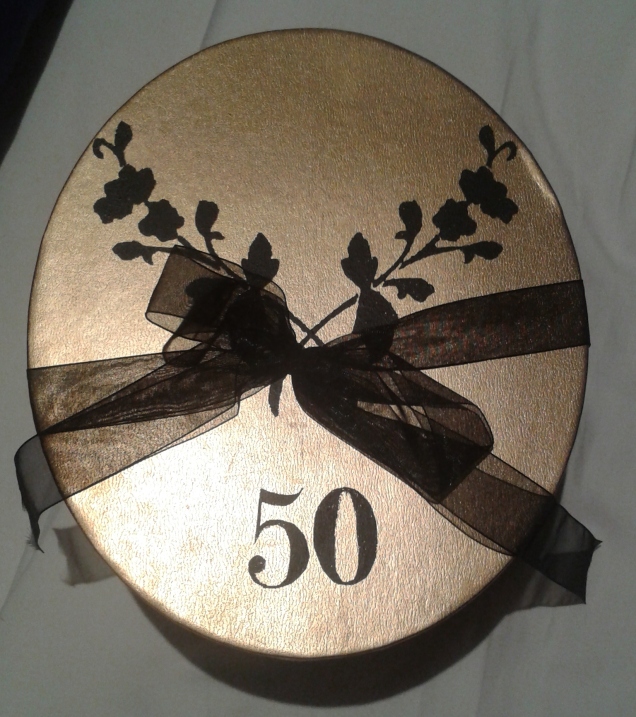 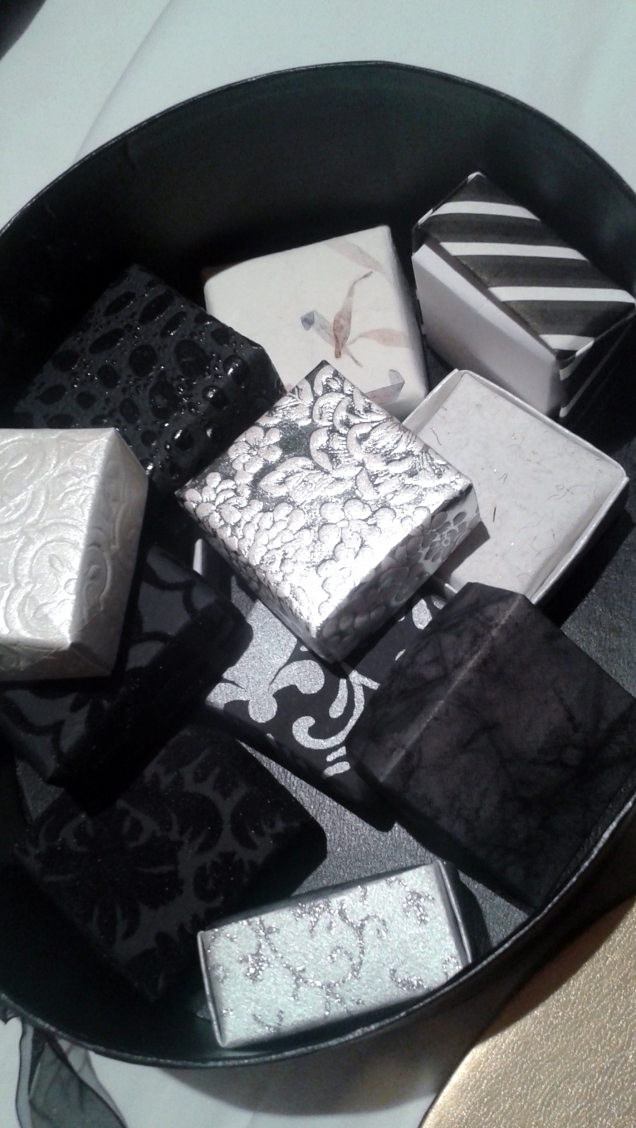 And inside THESE boxes were tiny pieces of paper glued to the bottom with 12 different experiences/events that they would have with us within the next 12 months – one for each month. 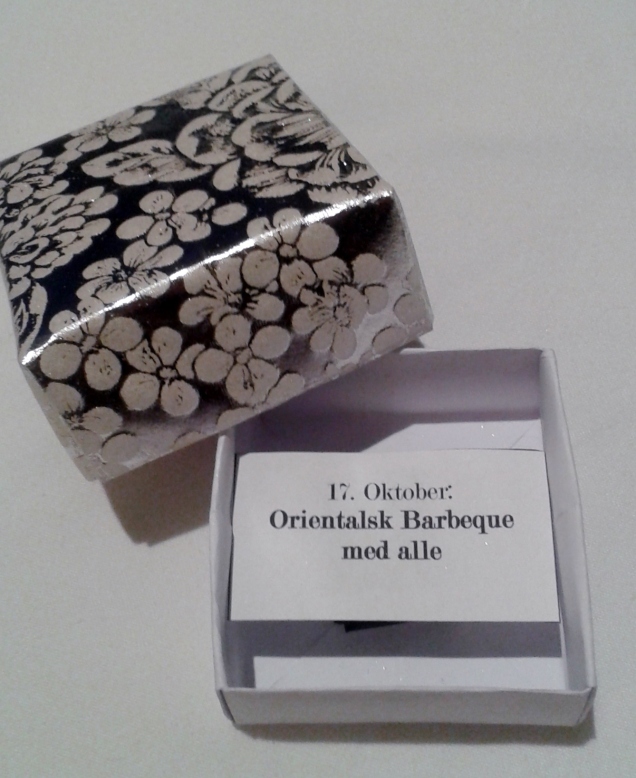 The experiences varied in category and in participants. For examples one is a bowling trip with all, whereas another is a lunch with their grandchild and his girlfriend. Shown in the picture is the last experience of the bunch, which is a restaurant visit with all of us on the day of their 51st anniversary.

My grandparents are usually not good with words, but reading the pieces of paper brought them to tears, which really said all that was necessary!

I just wanted to tell you that as of tomorrow I will not be posting anything new for about a week. That is because I am going on holiday!

A whole week in Tunisia – all-inclusive! SO EXCITED!

I hope your week will be good – and hopefully I get lots of ideas and inspiration for blog posts while I’m gone.

Now my holiday is not so far away! I’m leaving this sunday for Tunisia. I’m beginning to form a list of what I should bring. I always stress out a little when packing because I’m so afraid of forgetting something (I always call my mom to check if I remembered everything lol). I thought it might be fun to share my list of essentials I almost always pack when going on a sunny holiday. Of course I’ll be going in the fall so the weather might not be as good as in the summer, so I tweaked my list a little accordingly.

I didn’t list all the specific clothes I’m going to bring, as I just pack what I feel like at that moment.